Trump is Putin's sock puppet. The proof has been hiding in plain sight all along. 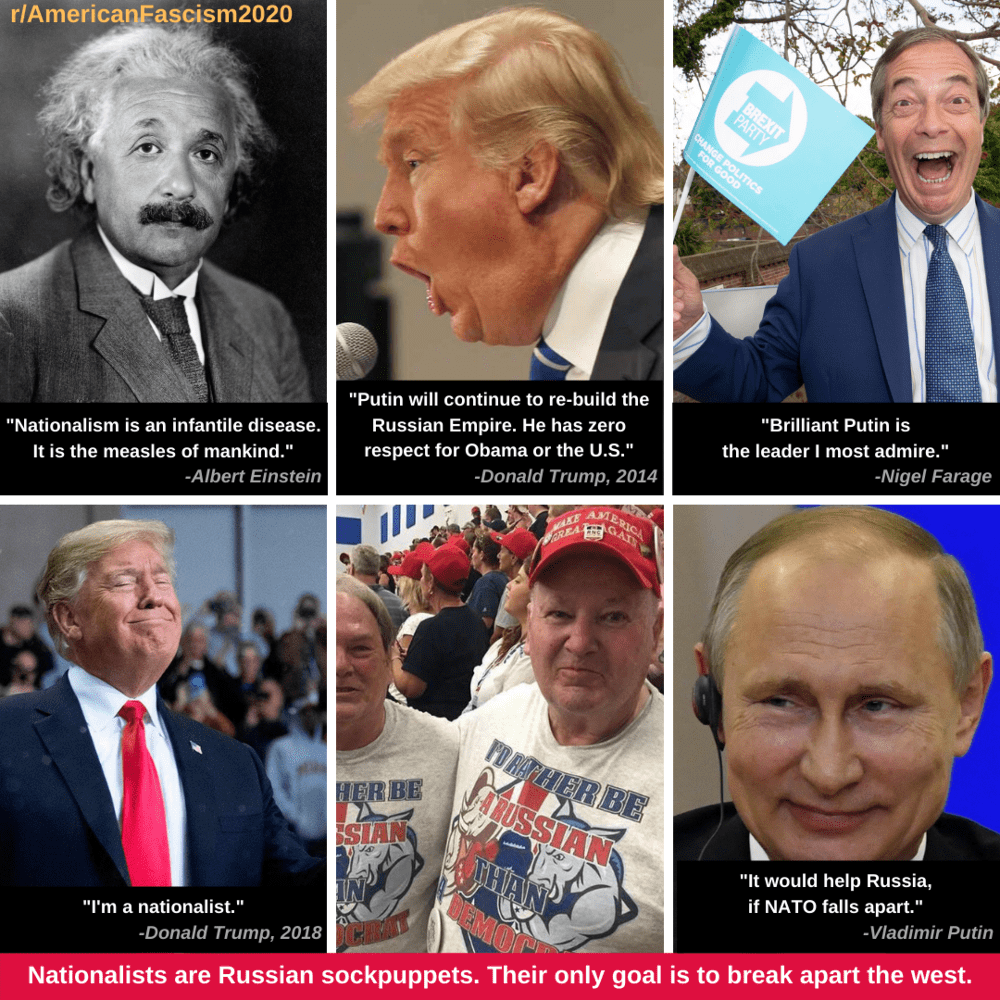 If you've never heard the information you're about to read on this page, you're probably a Fox News viewer. They keep vital information from you, to manipulate and brainwash you.


Trump’s businesses are full of dirty Russian money. The scandal is that it’s legal.
-Washington Post


How Russian Money Helped Save Trump’s Business. After his financial disasters two decades ago, no U.S. bank would touch him. Then foreign money began flowing in.
-Foreign Policy


If Trump Is Laundering Russian Money, Here’s How It Works
-Wired


Following the Money: Trump and Russia-Linked Transactions From the Campaign to the Presidential Inauguration
-American Progress


How Putin's Oligarchs Got Inside the Trump Team
-Time


“Trump is on our side”: A Russia-based asbestos maker sees an ally in the White House
-Quartz


Senate Report Shows What Mueller Missed About Trump And Russia. The final Senate report provides damning evidence of the counterintelligence threat posed by Russia in Trump’s 2016 campaign.
-The Intercept

Trump was bankrupt in the 80s and Russia gave him millions.

Deutsche Bank is involved in a huge scandal about laundering dirty Russian mafia money by funneling it to American businessmen.


Leaked Kremlin documents reportedly show Putin wanted to sow chaos in the US by supporting Trump. He succeeded.
-Business Insider


Trump Is Helping Russia Spread Lies About COVID Vaccines. Moscow is pushing a new anti-vax campaign to sow discord in the U.S. during the pandemic.
-Vice


Follow the money: Understanding the deep roots of Donald Trump's coup attempt. It sure looks as if Jan. 6, and the entire Trump presidency, were planned and funded by oligarchs in the shadows
-Salon


It's time to admit the obvious: Donald Trump sure is acting like a Russian agent
-MSNBC 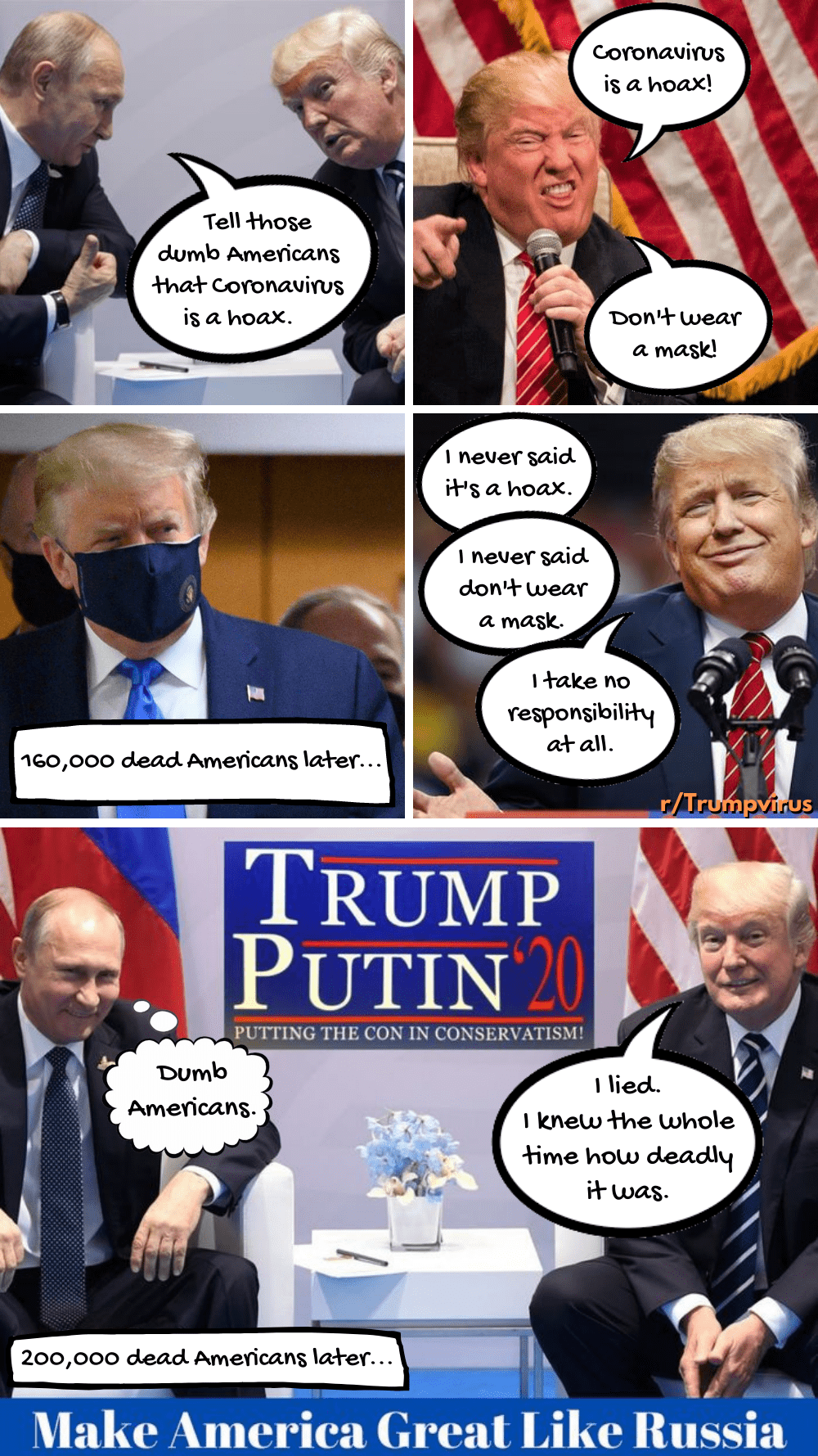 Trump's lie is the reason why to this day his brainwashed followers still refuse to believe the pandemic is real, and they reject social distancing, face masks, vaccines, and any other life-saving health measures to stop the spread of the deadliest pandemic in over 100 years.


Antivaxx Qanon Karen says there is no evidence that covid exists and the pandemic is a hoax.

‘It’s Too Late’: Doctor Says Dying COVID-19 Patients Are Begging For Vaccines. “They thought it was a hoax,” said Dr. Brytney Cobia of Alabama as she implored people to get vaccinated while they can still protect themselves.
-Huffington Post 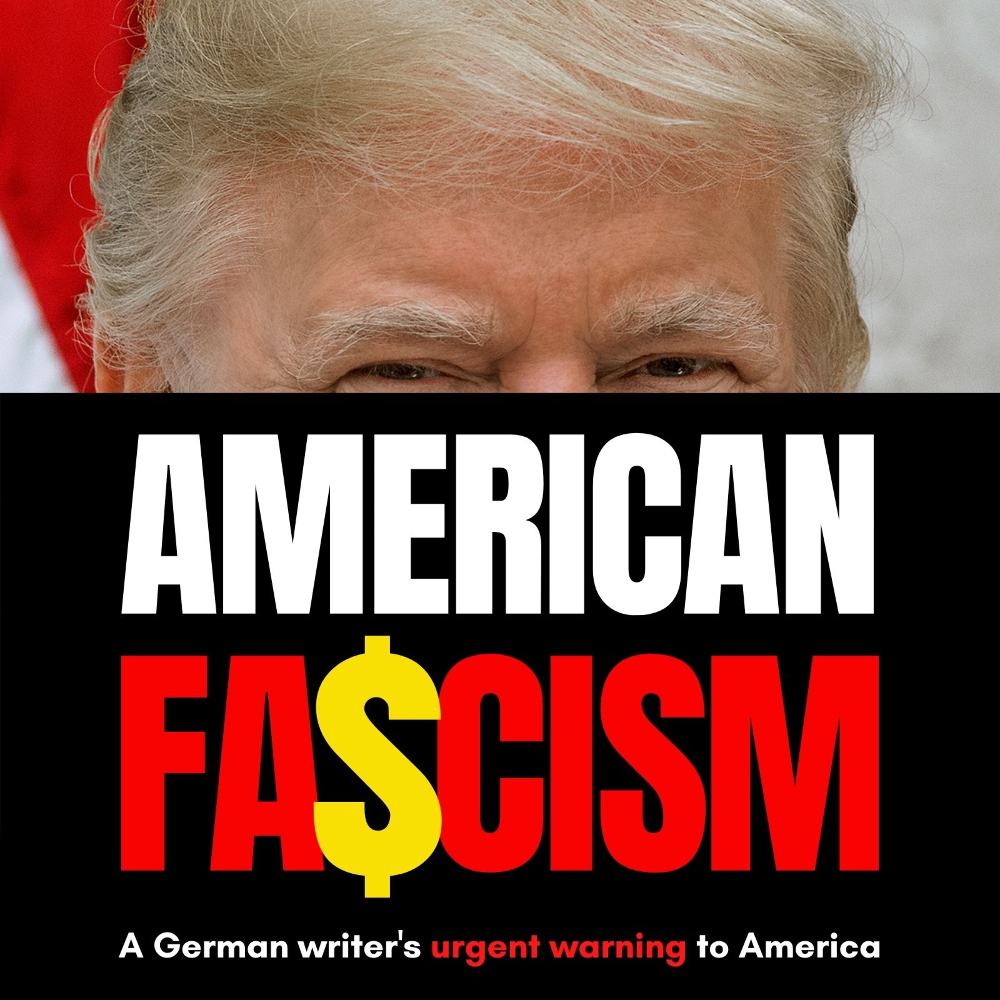 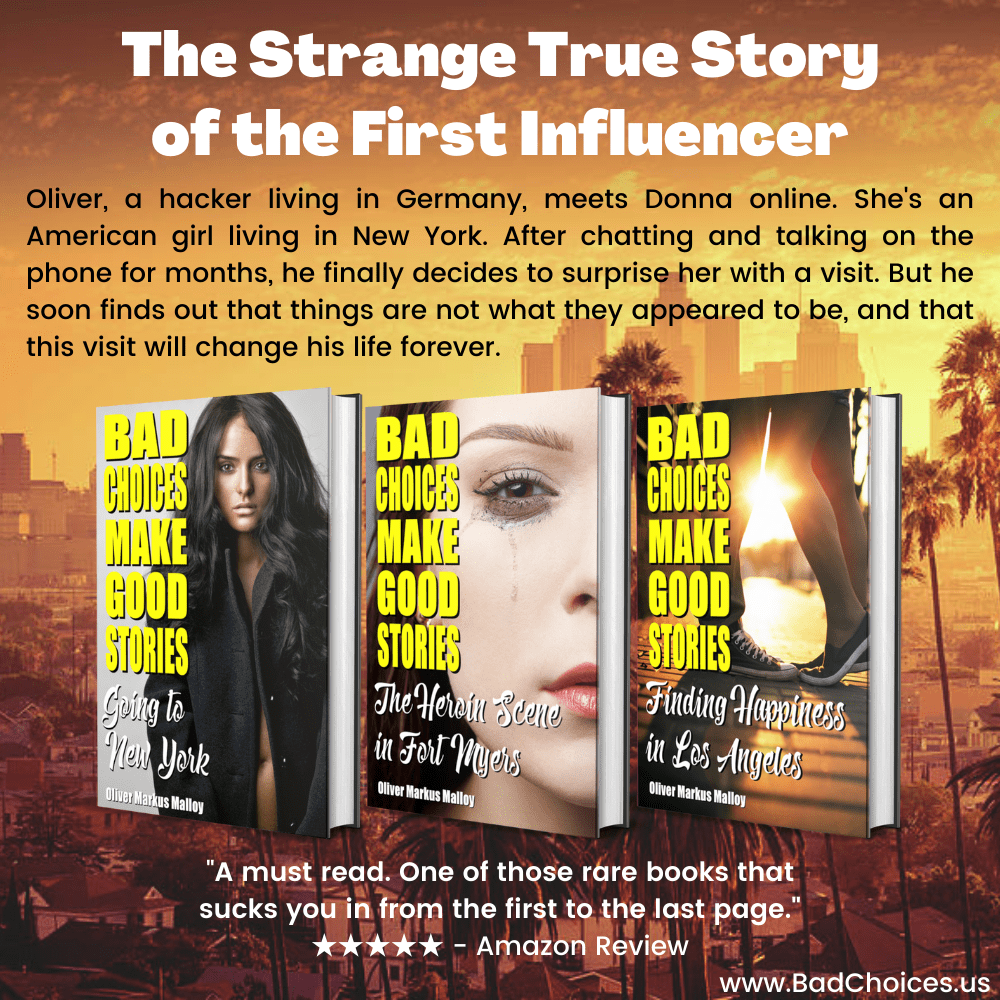 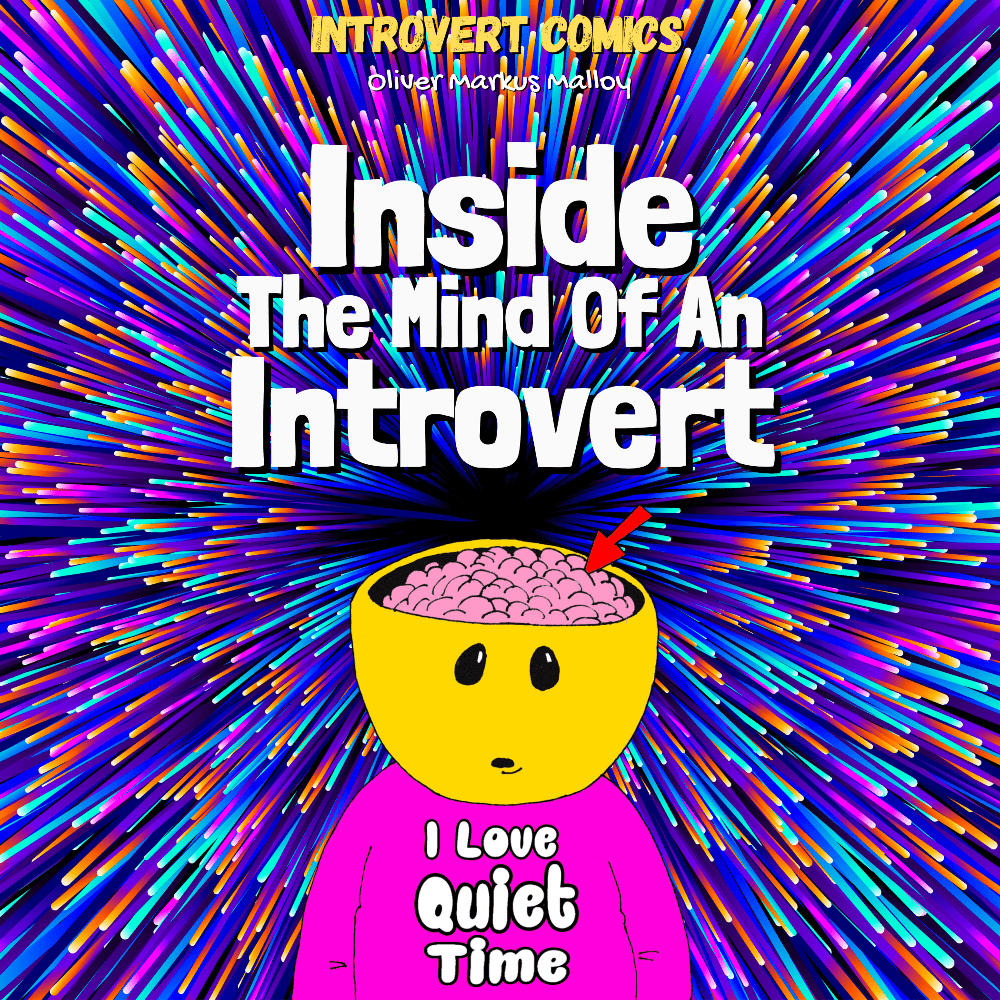 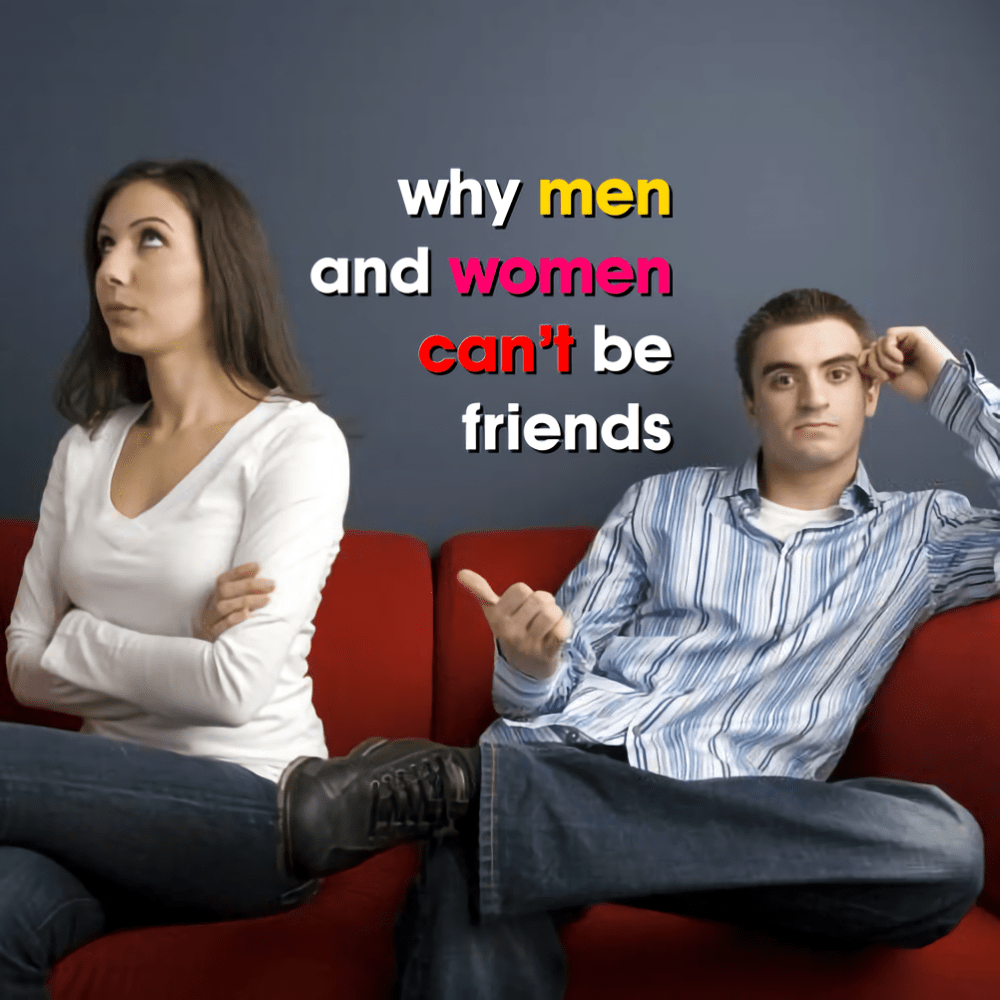